Is the BMW i7 a worthy flagship electric car? 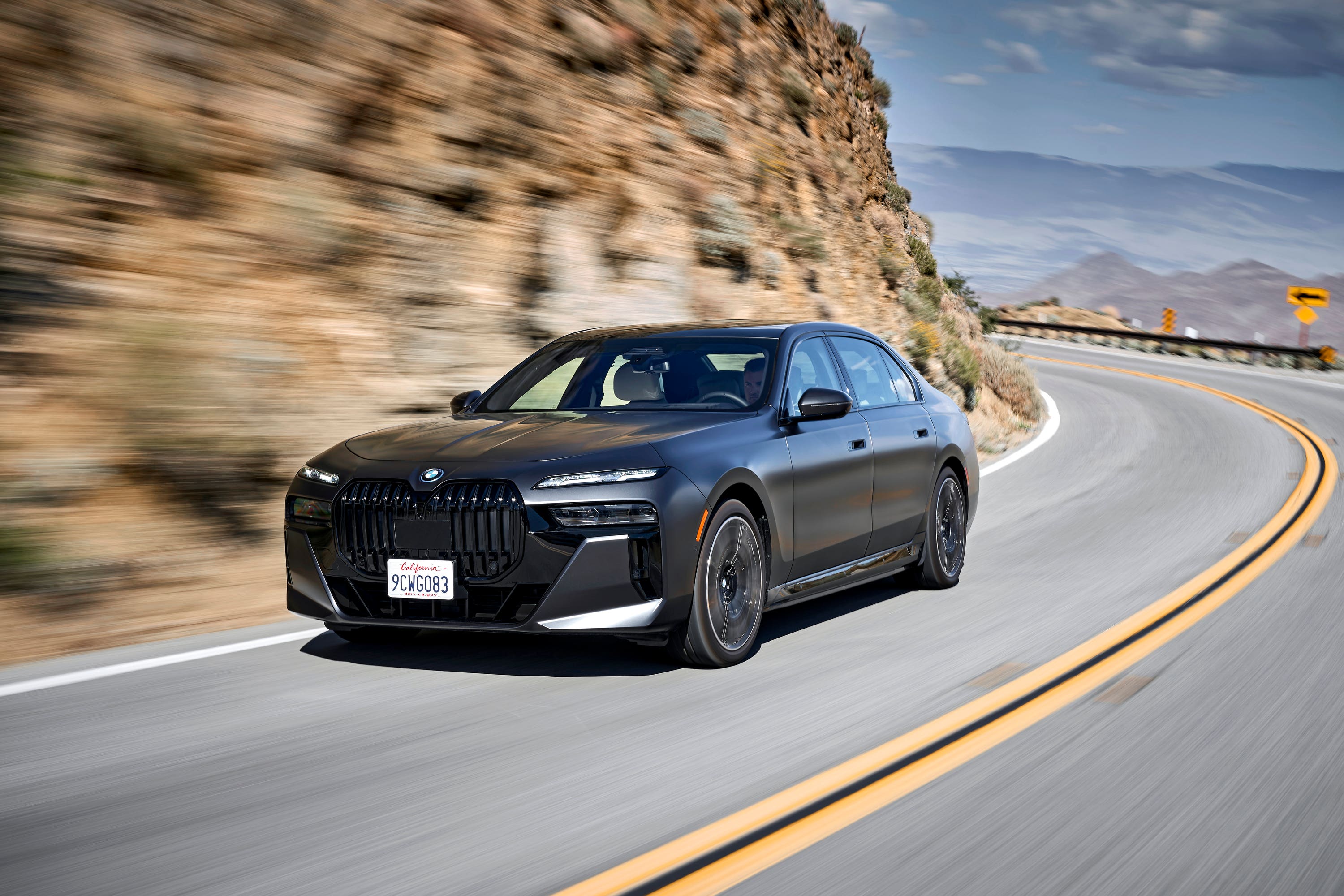 BMW is expanding its EV line-up with the i7 – an electric version of its 7 Series. James Baggott heads to California to put it to the test.

This is the latest – the tech laden, gadget toting i7, an electric version of its flagship 7 Series. It’s a clever new model with lots of tricks up its sleeves. Firstly there’s a new look to contend with – a gaping front kidney grille and refreshed headlights can certainly be described as, well, distinctive. Elsewhere there’s plenty of talking points including an optional 31-inch rear cinema screen that folds down from the roof lining and turns the back seats into a movie theatre.

The doors are powered and can be opened or closed with a touch of a button and the interior features a striking new ‘interaction bar’ for some of the controls. But gimmicks aside, it’s what’s driving the wheels that’s really of interest as this is the first fully electric option for the 7 Series.

While the new 7 Series is available with two plug-in hybrid options – sadly neither of which we got to drive at the launch – the big talking point is really the electric unit.

With a range of up to 388 miles, the car boasts 544bhp and a whopping 745Nm of torque. It’s an incredible unit that offers a huge range thanks to massive batteries buried in the floor.

Fast charging can be carried out at up to 195kW – which will give the car 106 miles of range in just 10 minutes. At home, where most people have 7kW chargers, a full replenishment of the batteries will take 16 hours.

On the road it’s incredibly smooth. The power delivery is linear and rapid, and like most electric cars, very rapid. With several different driving modes, piped in sound via the 36 speakers ranges from Hans Zimmer-like cinema scores to growling roars. It’s all rather dramatic.

The 7 Series has active steering and suspension which helps to offer the smoothest ride possible, even reducing roll to keep occupants comfortable. There’s a brilliant head-up display and augmented reality sat nav built into the dash that projects arrows onto a live video feed of the road ahead as well.

The car is full of clever tricks too. In countries that allow it, fully autonomous driving is available on motorways up to 85mph and it can even park itself. It will remember 10 different parking spaces in underground garages or similar and can take over and park for you.

The looks are a little controversial, but BMW likes to make a statement with its design. The new nose is the focal point but there are lots of additions to make it more aerodynamic and thus maximise its range.

BMW describes the new look as its ‘luxury class face’ and it’s also present on the new X7, so you better get used to it.

For the first time, there’s an optional two tone paint – with one colour above the doors and another below them. It’s all rather regal, but probably won’t be chosen by very many buyers.

Inside it’s rather classy too. The new interior has had a lot of thought put into it including spacious, reclining rear seats and that cinema screen to entertain executives.

The screen is 31-inches and, although it’s rather close to your face, the 8K quality is stunning. It works thanks to Amazon Fire TV software and a 5G internet connection from the car, which owners will have to pay for separately.

In the back, speakers are buried in the seats to really give a cinematic bass-filled experience and the 2000W Bowers & Wilkins sound system does sound incredible.

The auto opening doors are a bit of a gimmick, though – they close or open electronically at the touch of a button, just like they do on a Rolls Royce, but it’s really no quicker than just doing it yourself.

The spec is very high. There’s lots of kit included as standard, like a clever security system that records images around the car if it detects a break in.

The BMW curved dash has two displays – one 12.3 inches and the second 14.9 inches – which are angled towards the driver and are a brilliant addition.

Just nine per cent of global BMW 7 Series sales will head to Europe. Add in the fact that a lot of people have fallen out of love with saloons and it doesn’t really matter how many tricks the i7 has up its sleeves, as it’s unlikely many retail buyers will shell out for one. Far more of interest to them are the electric SUV models BMW offers, like the fantastic iX.

Most i7 models will actually find their way into the hands of chauffeurs and with much of the focus on back seat comfort – and entertainment – those who do get a lift in the new car are unlikely to want to get out at the end.

That said, the tech making a debut on the i7 is fascinating and (mostly) very well executed – what will be of real interest is just how quickly much of that trickles down to more affordable cars in BMW’s range.

Test Drives Is the BMW i7 a worthy flagship electric car?
« Previous Story

Is the MG4 EV the car to tempt buyers...