Renault has released the first in a new generation of electric vehicles – the Megane E-Tech Electric.

Based upon the Alliance-developed CMF-EV platform, the Megane E-Tech Electric draws inspiration from the Morphoz concept from 2019 and the Megane eVision show car of 2020.

It’s set to be the first of the firm’s cars to ‘Made in ElectriCity’ – Renault Group’s new EV production site in northern France. Utilising an electric motor with either 96kW and 250Nm of torque or 160kW and 300Nm of torque, the Megane E-Tech Electric delivers a 0-60mph time of 7.2 seconds.

There’s a choice of two battery sizes, too – either 40kWh or 60kW, delivering respective ranges of 186 and 292 miles. Both come with an eight-year guarantee, during which time they can be replaced free of charge should they deteriorate to less than 70 per cent of their normal capacity.

A full charge will take around eight hours when the car is plugged into a 7.4kW home wallbox, while 130kW charging capability means that 186 miles of range can be generated in as little as 30 minutes.

Inside, the Megane showcases a spacious cabin which is made even roomier thanks to the lack of central transmission tunnel, while in the middle there’s a distinctive display layout combining a 12.3-inch instrument readout and a 12.3-inch infotainment touchscreen. The latter utilises Google’s Android operating system, too.

A range of eco-friendly materials has been used throughout the cabin, too, including fabric seats made from recycled plastic. Refinement levels have been kept tip-top thanks to new acoustic-isolation technology. This includes the use of foam placed in the space between the floor and battery to help lower road noise, while areas such as the door bins and central cubbies have been fabric lined to ensure that anything placed within them doesn’t make a sound. 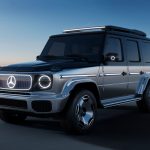 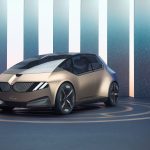 The BMW i Vision Circular is a fully recyclable...