Having a ‘halo’ performance brand can have huge repercussions for a mainstream car firm – just look at Peugeot, which is still reaping the benefits of its legendary 205 GTI hot hatch nearly three decades after production ended.

But as we switch to an electrified future, how to continue offering a sporty nameplate can prove challenging – what with these models typically appealing to petrolheads, rather than those focused on economy. But Peugeot has decided to get ahead of the curve, launching its new ‘Peugeot Sport Engineered’ (PSE) brand. The key difference here is that every model to come from PSE will either be a hybrid or electric, which is quite a shock to the system.

The nameplate debuts on the brand’s sleek 508, but is this a future that we can be excited about?

On first impression, you might think the 508 PSE – which is available as both a Fastback or the SW (estate) we’re testing here – is just the standard 508 with a slightly beefier engine and a fancy frock. That is true, in part, with this model being Peugeot’s most powerful road car to date, and getting a seriously aggressive design which we’ll explore later.

But there’s a lot more to it than just outright speed and visuals, what with Peugeot Sport fettling the suspension, chassis and giving it a wider track than the standard car.

There’s quite a lot going on with the 508 PSE underneath the surface, with Peugeot combining a turbocharged 2.0-litre petrol engine (which itself produces 200bhp), with twin electric motors. With one of these being on the front and another on the rear, it also means it’s four-wheel-drive.

There are some pretty impressive figures, too, with the combined petrol-electric output delivering 355bhp and 520Nm of torque, enabling a 0-60mph time of five seconds and a top speed of 155mph.

Yet, charge the model’s 11.5kWh battery up – which takes an hour and three-quarters with a 7kW wallbox – and Peugeot claims a 26-mile electric range. Though you’re unlikely to ever hit the 138.9mpg fuel economy figure, low CO2 emissions of 46g/km give it a benefit-in-kind of just 13 per cent for company car drivers, which would bring welcome savings over the Audi S4 Avant and BMW M340d Touring, which make-do with conventional engines.

Our week of testing was predominantly in the wet (typical Britain, we know) and it truly showcased just how capable the PSE is. When you’re pushing on, you can really feel the traction at the rear axle helping to drive you around the corner. The well-weighted steering has clearly had plenty of recalibration to make it feel more involving than the standard car, while the agility for a 1.9-tonne hybrid estate car is nothing short of remarkable.

You also sit delightfully low in the superb leather and Alcantara sports seats that help to elevate that sporty feel, while should you want to tame things down a bit, a ‘Comfort’ setting makes the 508 PSE a decent cruiser. It’s still pretty firm, though, thanks to Peugeot stiffening up the suspension by 50 per cent and large 20-inch wheels wrapped in low-tyre wall Michelin Pilot Sport 4S rubber.

Even in non-sporty guise, we reckon the 508 SW is one of the most striking estate cars on the market. But in PSE trim things are certainly taken up a notch. It attracts glances on the road like few hybrid wagons ever could, with the darkened chrome Peugeot badges not immediately noticeable and inviting the inquisitive to take a closer look.

The PSE can be spotted by its bold grille with larger air intakes, as well as the lashings of Kryptonite (the greeny-yellow bits, if you’re wondering what we’re on about) on the front-end, badging and brake callipers. You’ll also notice the fancy aero pieces that stick out on the lower bumpers, along with a fancy rear diffuser. It is – to our eyes at least – one of the best-looking cars you can buy today.

The 508’s interior is bold and imaginative, that’s for sure, with a large upfront digital instrument cluster up ahead, a prominent touchscreen with aircraft-like toggle switches and Peugeot’s now-infamous small steering wheel. Though it all looks the part, the ergonomics won’t suit all, with the seating and steering wheel position requiring plenty of adjustment so you can see the dials properly. The touchscreen is also quite laggy, and not anywhere as good as those found in Audis and BMW at a similar price.

More positively, the PSE offers the same large 529-litre boot space as the standard 508SW, while rear-seat space is plentiful for adults, even with the model’s sleeker styling than what’s typically found with an estate car.

But the 508SW PSE is a truly exciting car that showcases that the electrified future is something to really look forward to. It brings innovation, performance and indicates just how far Peugeot has transformed itself in recent years. Though Peugeot Sport Engineered’s first car might not make the most rational sense, it’s a brilliant halo model and one that gets this firm’s new electrified sporty line off to a fantastic start. 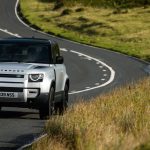 The Audi e-tron S is an electric SUV with...