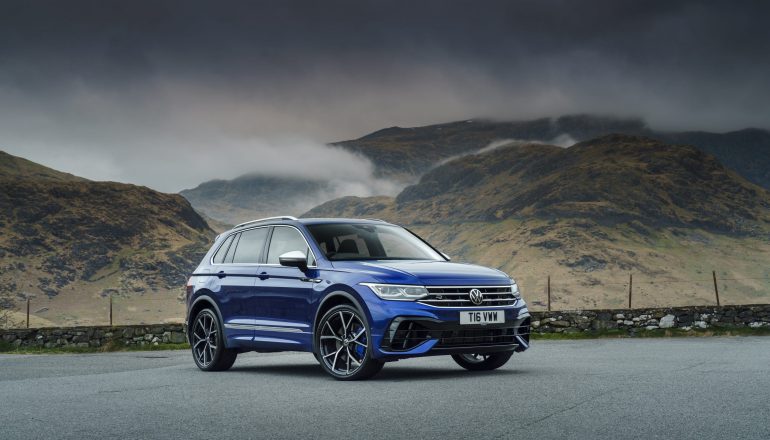 Volkswagen has hit on a pretty successful recipe: build cars for every segment, then slap an R badge on the boot, give it a sporty look and rapid engine, and you’ve got yourself yet another performance car as a halo for the line-up.

That might sound like a cynical intro, but it’s a recipe that works. We’ve got the Golf R hatchback, T-Roc R crossover, Touareg R SUV and now this, the Tiguan R. It’s a mid-sized SUV that takes the usual VW R combination and applies it to the firm’s best-selling model. It should sell like hot cakes, then…

The regular Tiguan range received a big update late in 2020, which means it gets a new-look front end, upgraded assistance systems and a new infotainment system.

Volkswagen considers the Tiguan R a separate model from the Tiguan as it’s been given a big makeover from its R department. It gets a reconfigured all-wheel-drive system, R-specific petrol engine, lowered ride height, sports exhaust system, new ‘progressive steering’ and drive mode selection.

If you’re at all familiar with your Volkswagen performance models, you’ll recognise the engine used here. It’s the latest generation of the EA888 2.0-litre, turbocharged petrol unit, here with 316bhp and 420Nm of torque.

We’ve become used to its old-school, boosty nature, with the sports exhaust giving off a great sound. It doesn’t feel quite so urgent here as elsewhere on account of being in a heavy SUV, but it’s got more than enough punch to make swift progress.

When you’re really pressing on, the Tiguan does a great job of hiding its size. You never feel like you’re in a hot hatch, but covering country lanes at a rapid pace is less intimidating than you’d expect. And if you put it in sport mode and use the paddles to shift manually, the gearbox is almost seamless between shifts.

However, it’s let down slightly by its everyday driveability. The gearbox is sluggish and unresponsive, being too reluctant to drop down a gear, The ride isn’t quite as settled thanks to its sportier setup, but that’s only a small issue.

The Tiguan is already a handsome SUV, but in R trim this is only amplified. Up front there’s a sleek headlight design that blends into the prominent front grille, while the lower bumper has swoops, blades and large intakes that hint at the performance on offer.

At the back there are some elaborate LED lights that look great at night, while the lower bumper has an aggressive diffuser design that incorporates a quad-exit exhaust system. Meanwhile, the 21-inch alloy wheels fill the arches nicely and, coupled with the lowered ride height, give it a purposeful stance.

The cabin is large and spacious, with an imperious driving position that gives you a fantastic view of the road. The large glasshouse surrounding you lets lots of light in, helping the car to feel airyl despite the dark interior upholstery.

The seats are comfortable and the touchscreen is clear and easy to use. However, VW has an obsession with touch buttons elsewhere, and they’re quite unpleasant to use. The heating controls are fiddly, while the steering wheel’s touch buttons are genuinely unpleasant to operate. Minor irritants, but irritants you’ll use all the time…

The Volkswagen Tiguan R might be a new model, but it’s an already familiar package. That 2.0-litre turbocharged petrol engine has long won plaudits for its boosty nature, while the handling is genuinely impressive for an SUV.

It’s not perfect, though. There are some concessions to comfort and running costs compared with less racey models, while the touch-sensitive buttons common to the range continue to annoy. However, as an overall package, the Tiguan R is a compelling, stylish and pacey SUV. 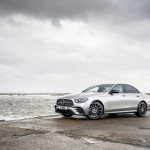 The Mercedes-Benz E-Class is a classy, frugal executive saloon
Next Story »