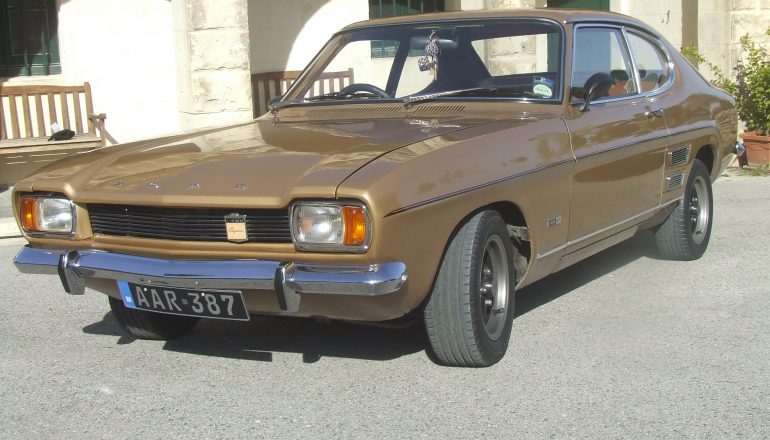 Thomas Camenzuli’s gold-coloured Ford Capri has accompanied him on a life journey, says JOSEPH BUSUTTIL from the Old Motors Club.

The Camenzuli family of Mosta was always an oasis where old cars thrived. Three of four brothers droved classic vehicles. George had a 1950s Ford Prefect, Nenu sported a 1960s Ford Cortina, while Benny was behind the wheel of an old Vauxhall Victor. Their motoring preferences influenced their father George, who then bought a 1950s Morris Oxford. Seeing that his other son, Thomas, had come of driving age and did not own a car, George passed it on to him.

“I was thrilled to bits that now I also had a classic vehicle like my brothers,” recalls Thomas.

“The Morris was in a good condition. The body did not require any repairs, while its 1400cc engine was in a perfect state. The only task carried out was that I changed its black colour to blue. Having a job in a hotel in the north of Malta, it became my daily means of transport for many years, giving me no trouble in the process.”

In the neighbourhood of the Camenzuli family, there was an acquaintance whose claim to fame was that he had bought the first Ford Capri Mk1 to be imported in Malta in 1969, which had come to the island carefully cossetted in a large wooden crate.

“I used to gaze lovingly and at length whenever the gold-coloured Capri happened to pass through our street, or else spotted it parked in the spacious Mosta square, where I would spend some time going around inspecting it. I fantasised that one day I would be behind the wheel of this dream car.”

After a decade, the Capri owner decided to buy a Ford Mustang, and passed on the Capri to his wife. However, after a couple of test drives, she felt uncomfortable and was afraid to drive it any more, claiming that the car was too big and the bonnet was too long for her. Consequently the car came on the market.

When in 1969 the Ford company thought of a marketing strategy to launch the new vehicle, the sales pitch decided upon was “Ford Capri – The Car You Always Promised Yourself”. This advertising slogan was not lost on Thomas, who, true to form after having spent so much time yearning, now lost no time in purchasing the classic car.

“The car was in excellent condition as its one owner took immaculate care of it. The 16GT model just needed the tender loving care it had long been accustomed to. In fact I continued to harness the Morris Oxford as my daily car, while reserving the Capri for the occasional Sunday drive.”

Thomas’ 1969 Capri belongs to the first Mk1 series production that came out between that year and 1974. It was the brain child of the American Phillip Clark, who was also involved in the design of the Ford Mustang. In fact, it was intended to be the equivalent in Europe of the Mustang, a sort of European pony. The vehicle used the mechanical components of the Ford Cortina Mk11, so much so that the British magazine Car described the Capri as a Cortina in drag!

Although a fastback coupe, Ford wanted the vehicle to be affordable for a wide range of potential clients. Consequently the car was fitted with a variety of engines – Taunus, Kent, Essex, Cologne, among others – price depending on the power. On its launch, reception was on the whole favourable. During its life span, the Capri came out in two other series, the Mk11, between 1974 and 1978, and the Mk111, that was produced from 1978 to 1986.

The Capri was manufactured in plants in the United Kingdom, Germany, Australia and South Africa. Sales of the three series were highly successful, and during its 17 years of production, nearly two million units were sold.

In 1981 Thomas decided to quit his job in the hospitality industry, leave Malta, and try to settle in the United States.

“Many members of my wife’s family were living happily there, and together with our daughter, we planned to make a new start in San Matteo, California. Before leaving, I tried to sell the old Morris Oxford, but no agreement was reached with a prospective buyer, and so I just gave it to my brother Joseph.”

With the Ford Capri, it was a different story. He could not part with it. At the back of his mind, Thomas had a feeling that one day, he would return to Malta, and the Capri would provide continuity, a living link with the mother country. So he garaged the vehicle, and made arrangements with his father in law to look after the Capri, take it out regularly, and pay all the necessary annual licence and insurance dues.

“We were very content there, in a sort of paradise. The family increased by two more children. I had a good job in the electronics industry. The weather there is conducive to the enjoyment of driving, and my heart would skip a beat whenever a classic car came in view. Memories of the Capri left behind would immediately spring to mind.”

In 1991, Thomas and his family returned to Malta.

“One of the first things I established contact with again was the Capri, which thanks to the meticulous maintenance of my father in law, responded immediately to my gentle prompting. I soon found a job, again in another leading hotel in the north of Malta, and the Capri started being continually harnessed as my daily car.”

This state of affairs continued until eight years ago, when Thomas took the Capri to Tony Vassallo, an insurance surveyor, for evaluation. He was told that it would be a pity to used such a classic car for regular use, as the road stress, tear and wear would eventually take their toll. The message was immediately understood, and shortly afterwards, Thomas started driving a modern car for his transport needs. The Capri was now rested and taken out for Sunday drives only.

As fate would have it, Vassallo is also a committee member of the Malta Old Motors Club, and he encouraged Thomas to join the OMC.

“The club is a haven for me. Besides regularly taking part in events, I also find the networking between members most encouraging and helpful. The only time I skip an activity is when it is raining, as similar to many members, I feel I would be damaging the car. My next aim is to join the annual trip to Sicily, something that I have refrained from doing as I am afraid that something would happen to the vehicle while overseas. But I must overcome that fear,” he says. Thomas laments the fact that his wife Susan and his three children have no enthusiasm for old motors.

Two years ago, he replaced a number of components in the Capri, like the water pump, the cylinder head gaskets and the brake servo mechanism. While in the process, the spray of the vehicle was repainted in the original gold colour. His pride and joy, Thomas leaves no stone unturned to maintain the Capri in its showroom condition.

“My sole regret is that some time ago, I left it outside my home just for one night, and it was broken into and driven away. I got the shock of my life when I went out the next morning, and it had disappeared! Luckily, the culprit or culprits were only looking for a short joy ride, as it was found later in the day a little distance away from the Mosta police station. Investigating forensic experts wanted to elevate fingerprints from the dashboard, but that would have meant spraying harmful chemicals onto the dashboard. Since no damage was done to the car, I told the police to drop the case.”

Thomas expresses his satisfaction at the increasing popularity of old motors locally, but he rues the fact that there are owners who prefer to keep their classic cars under lock and key, and never seeing the light of day. “I have been told that there is one person in Mosta who has a large garage filled to the rafters with old Ford models, which he never takes out. What a pity,” he concludes.

Technology and design
Next Story » 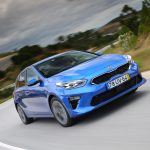 A Ceed with roots