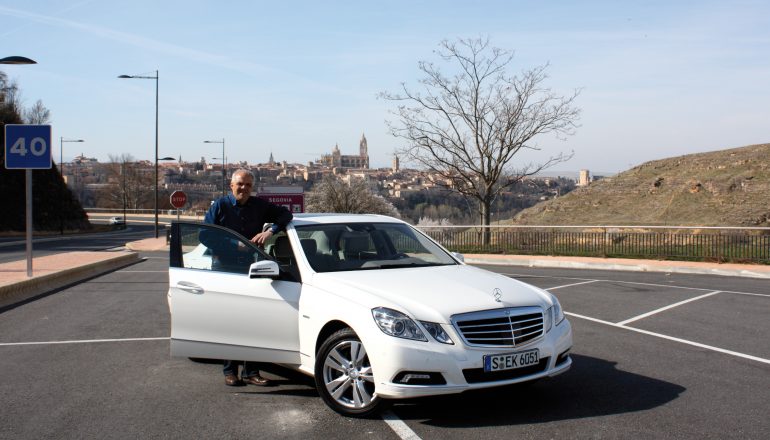 Paqpaq editor, TONIO DARMANIN, jets off to Spain for the launch of the new and much-awaited Mercedes E Class.

I keyed in the following thoughts on my Mac while flying back home from Madrid via Frankfurt. The journey started with the alarm going off at 3.15 a.m. to make it in time for my first flight at 6am.

I checked-in electronically and selected an aisle seat with what seemed to be some extra legroom. As I walked along the aisle of the plane through First, Business and Club Class towards my humble abode in Economy, the seating got progressively smaller and tighter. It seems such a waste to have half of the plane fitted with enormous, sofa-style seats (most of which remain empty), whilst hundreds of passengers are squashed like the proverbial sardines into the remaining half of the plane.

I settled down into my seat and duly emptied the ‘goodies’ that I normally surround myself with during flights… namely my Black­berry (which I normally switch off at the point where the hostess is threatening to take it away from me), a pile of magazines (generally of the motoring, biking and gadgetry variations), a notepad, a pen and the brochures from my latest test-drive. There was only one passenger at the other end of the row so the middle seat was free… Club Class facilities at economy class prices, or so I thought.

For a few interminable minutes, I hoped that nobody would actually claim this vacant seat. But luck would have it that at the very last minute, a couple composed of a bald ex-boxer and his well-accessorised blonde consort turned up and one of them inevitably ended up having to sit next to me for the entire trip. Unfortunately, it wasn’t the blonde!

My ‘neighbour’ for the next couple of hours duly dumped himself, leather jacket and all, into the middle seat… legs wide open! I sat miserably with all my ‘goodies’ piled up on my lap. Due to the limited space available, I regretfully refused breakfast. Needless to say, he sawed away at his chicken breast with his plastic knife, constantly digging his elbows into my ribs in the process. I ended up leaning out into the aisle, getting rammed by every trolley that passed my way.

Much to my delight, he finally fell asleep and I was able to bring my Mac out to do some writing… using only my right hand to avoid moving too much and waking him up. Every time he changed his sleeping position, I quickly minimised the document lest he’d realise that I was writing about him! Indeed, all this was in sharp contrast to the immense sense of comfort and luxury that I had just experienced during my weekend in Spain, courtesy of Mercedes.

The Mercedes E Class is a completely new car and it’s the brand’s most important model for the year, having been around for more than six decades ever since its launch in 1947. Since then, it’s been the vehicle of choice for over 12 million customers. It comes at a crucial time for the company and in one of the hardest periods for the industry, so the fact that over 40,000 units were ordered prior to its launch undoubtedly augurs well.
Performance remains an important consideration, so much so that upon arrival, for my first drive from the airport to the hotel, I opted for the 5.5 litre V8 version, simply to get it out of my system.

Here, one must factor in the harsh realities of today’s driving situation with more restrictive and effective speed control systems relentlessly invading European roads. At one stage, I came across traffic signs displaying the speed that I was actually travelling at in real time, next to the speed limit in that particular zone – a stark reminder that ‘big brother’ is constantly watching. So rather than focus on acceleration and top speed, I decided to savour the luxury, comfort and reassurance that the new E Class has to offer, attributes for which Mercedes sets standards in the premium sedan segment.

I hadn’t been to this part of Spain for some time, so I planned a 200km round trip from Madrid to re-visit Segovia, typified by its spectacular aqueduct bridge, and the impeccably kept medieval fortified city of Avila, two of my favourite destinations in this country.

The E Class looks powerful and dynamic, brim­ming with personality but not overly aggressive. It retains the 3-box ‘pontoon’ configuration, as well as the 4-headlamp face. However, they have managed to streamline the car even further and achieve an unprecedented drag coefficient of only 0.25. Mercedes believes that a relaxed driver is a safe driver and therefore spares no expense in creating an excellent environment inside their vehicles.

The seating position is infinitely adjustable to accommo­date the driver, and the new model has gained more internal space resulting in added shoulder, head and leg room. The E Class offers a perfect combination of styling and functionality where the look and feel of the controls and materials reflect the premium status of the vehicle, but are also easy and practical to use.

Talking about quality, every effort had been made to eradicate gremlins of the past and Mercedes have put over 36 million test kilometres on the new E Class, making it the most tested passenger car ever, in an effort to achieve outstanding levels. The car has also undergone over 150 real life crash tests to ensure that everything does exactly what it says on the brochure.

The power plants that are most relevant to the local market will undoubtedly be the E200, E220 and the E250, all of which are based on a 2.2 litre, 4-cylinder diesel engine. These new Euro 5 compliant units produce higher output but consume and emit less CO2 than the ones they replace. The 250 CDi, for instance, develops 204bhp, an incredible 500Nm of torque, emits only 139g/km of CO2 and gives an average of 44 miles per gallon (or 5.3 litres to 100km).

However, the highlight of this new model must certainly be the array of innovative technological features that are available – all aimed at enhancing the driving experience and comfort, and offering unprecedented levels of safety. I was impressed by the operational simplicity of these features. Indeed, one does not need to be a technological wizard to use them. The car will sound an alarm and suggest you stop for a coffee and a rest when it senses that you are dozing off and it will warn you and actually brake if you are about to collide, drastically reducing the magnitude of the impact as well as the possibility of injury.

The new E Class projects a aura of style and sophistication. It is jam-packed with gadgetry and it carries its occupants in absolute comfort and safety. If only I had opted to drive all the way home!

This article was first published on Times of Malta on April 6, 2009

It just Getz better
Next Story » 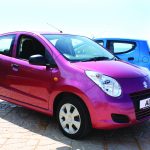